“How do I fix an image that won't go where I want it be? And how do I insert and format the captions for my tables and figures?”

There are multiple ways in which an image can be placed and positioned in your document, but the most common way to insert an image into your document is outlined below. 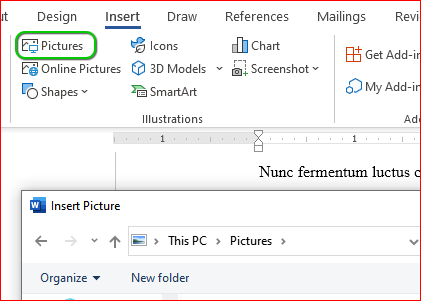 Once your image is inserted into your document, you need to determine how it is positioned within the document. This will help determine why your image may appear to be out of place. The way to determine this is as follows:

Left-click (select) the image > Left-click the Layout Options icon to the upper right of the image. 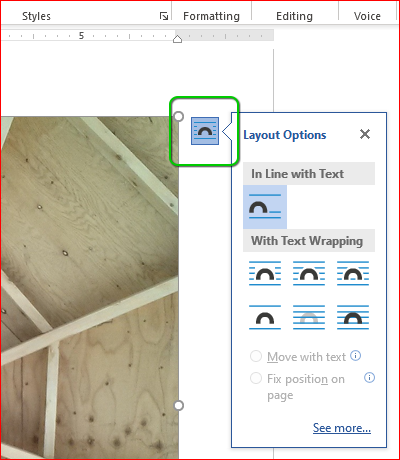 “In Line With Text”

By default, images are inserted at the location of the cursor, and they will be positioned In Line with Text.

This means that an image will have static placement on its own empty line, yet on the same layer, as the document text. Movement and repositioning of the image is restricted to the constraints of typical sentence and paragraph layout. This will keep your image in a static position within the margins on the page (independent of justification), yet allow it to sit between preceding and following lines of text (or perhaps other images).

Most of the time you'll likely want your image positioned with the default option of In Line With Text. As text is added or removed from the body, your image will move “up and down” your document, depending on how much text is modified and the size of your image (in relation to the amount of white space on the page).

If the image is positioned With Text Wrapping this will afford three scenarios.

In scenarios 2 and 3, as the image is repositioned around the page, it does not interfere with the structure of the text itself. Effectively, the text does not actually “wrap” itself around any text because the image and the text are on separate layers from one another.

It is entirely possible that while working with your images, you've inadvertently changed the type of layout for your image. This is not an uncommon error and happens frequently—and it is most likely the reason why your image is out of place on the page.
For further information on how MS Word handles images, please refer to Wrap text and move pictures in Word from official Microsoft support.

The steps for adding captions to both figures and tables are almost identical, with only minor difference. Once your figure or table is in place, your image is ready for caption placement.

There are two ways to open the Add captions dialogue for figures. 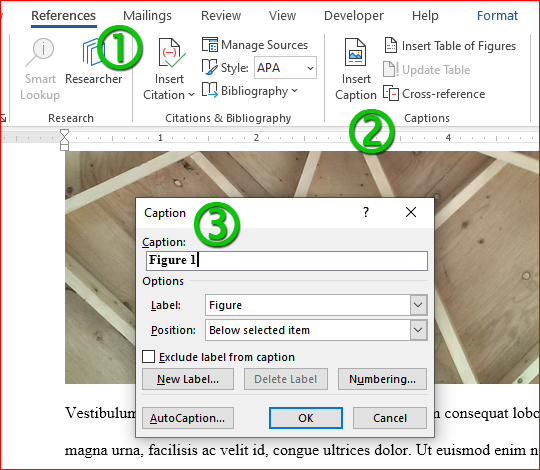 There are also two ways to open the Add captions dialogue for tables. 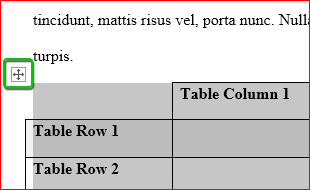 From within the Add caption dialogue: 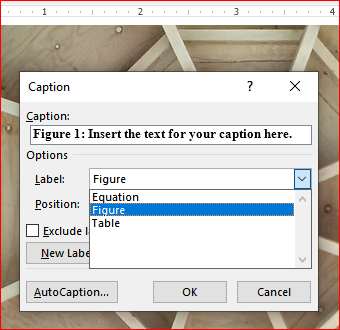 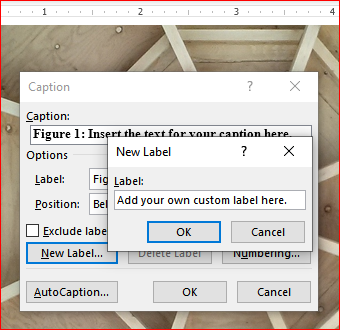 As you continue to add captions throughout your document, the numeration of the captions will automatically follow a logical numerical sequence. For example, if Figure 1 and Figure 2 are already in place, the third caption added will automatically be numbered Figure 3. If you have Figure 1 and Figure 2 in place, yet you need to add a figure in between the two, then your newly added caption will be numbered Figure 2, and the former Figure 2 will be re-numbered to Figure 3. This auto-numeration works the same way for any and all labels you use throughout your document.

By default, captions are numerated in chronological sequence throughout a document, independent of any pagination and sections. However, captions are sometimes required to be chronologically numbered according to chapters and sub-chapters. For example, instead of Figure 1, Figure 2, Figure 3, etc., you may need to caption your figures Figure 1.1, Figure 1.2, Figure 3.1, Figure 4.1, Figure 4.2, etc.

Out of the box, adding captions in MS Word does not afford this, however, with some extra configuration, you can format your document so that your chapter headings will allow your captions to be numbered according to the chapter in which they are located. You can achieve this by setting up a multilevel list and linking it to your chapter headings. A multilevel list is simply a list that has other lists nested inside of it, whether they are other numbered lists or bulleted lists.

With the first chapter heading selected (or your cursor positioned inside the heading), you can define a new multilevel list via the multilevel list menu on the Home tab. 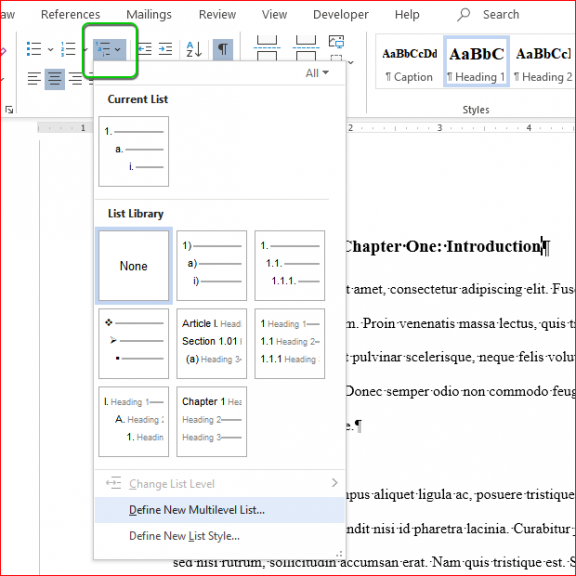 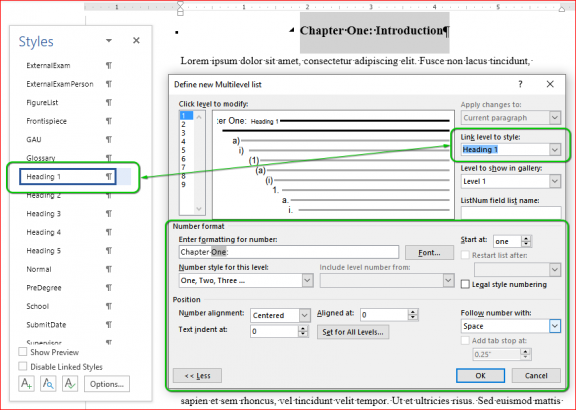 You do not need to use all nine available levels in a multilevel list. You only need to use the same depth of list levels as you have depth of chapter and sub-chapters.

Applying the Numeration to your Captions 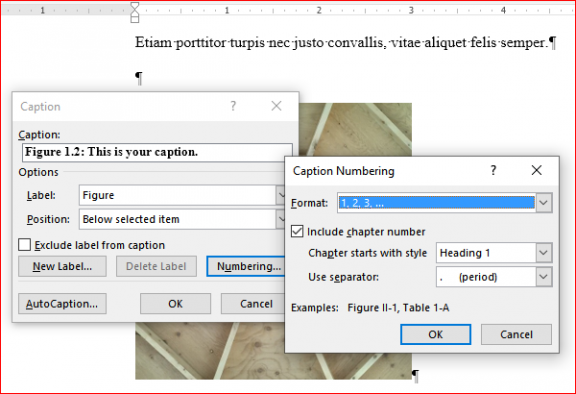 Once the configuration and application of your caption is complete, your caption should indicate in what chapter and in what position within a sequential order it is located. The following example indicates this figure is the second figure in the first chapter. 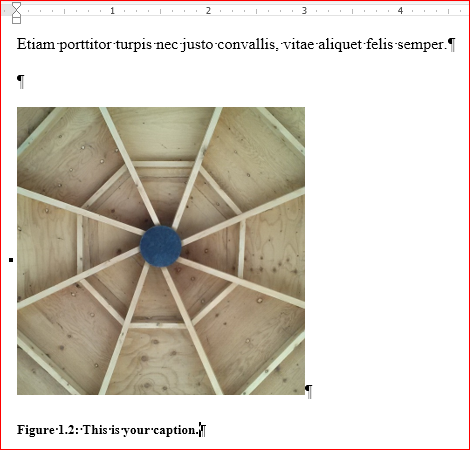